Listen to Chris Shea's interview on Pivot and Thrive!
Chris Shea: Writer Who Draws to Connect With Her Community

On a recent trip to Washington DC, I was riding in my son's car and we were stopped at a light at a busy intersection during morning rush hour. It was raining.  And windy. Across the intersection I saw an old woman with a shopping cart overflowing with her possessions. She was using her umbrella to shelter her things. Her's was a spindly one with the spokes poking out here and there, an umbrella that had clearly lost the battle with the wind too many times, an umbrella that would gather more rain than it could ever repel. 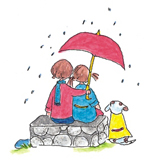 There I sat in a nice, warm car holding a brand new umbrella.  It was a gift from a publisher of mine, a beautiful black large umbrella that seldom gets used where I live in San Diego California. I watched her fighting the weather and the curb. And then almost as an afterthought I said to my son, "I should give her my umbrella…" But by then it was too late. The light changed and there was so much traffic and we were running late. So we had to go….

I would give anything to have given her my umbrella.

So I decided that the next time I think to myself that I should do something, something right and good, I'm going to; because doing something good and wishing I had are very different things.